THE NATIVE AMERICAN PEOPLE ARE VERY TALENTED ARTISTS AND SILVERSMITHS; THEY CREATE A UNIQUE WAY OF THEIR ART THAT IS NOWHERE ELSE TO FIND. MAKING JEWELRY IS THEIR LIVELIHOOD. WHEN YOU BUY JEWELRY FROM OUR COMPANY YOU ARE BUYING DIRECT, NO MIDDLE - MAN - FROM THE ARTISTS HANDS TO YOURS. 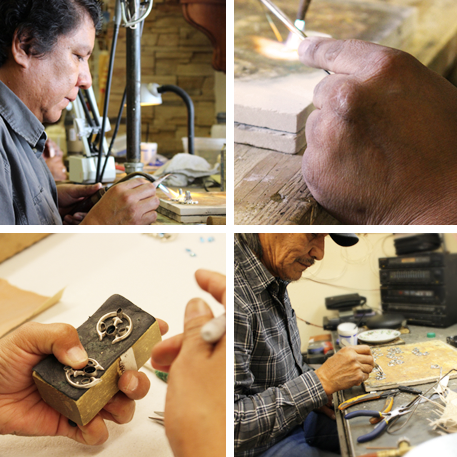 The artistry of the Native American silversmiths shows through in the beauty and high level of craftsmanship of our handmade sterling jewelry from New Mexico. It was in the 1800’s that the Spanish settlers in America first taught the Native Americans the art of silversmithing. In combination with the sterling the turquoise stone has been favored by the Native Americans to utilize in their jewelry. Evidence dating back to prehistoric times shows that ancient Native Americans were mining for Turquoise. This love of turquoise and commitment to a high level of silversmithing continues to this day. We work directly with the artists to bring you the best in handmade Native American silver jewelry. The most impressive examples of Native American hand made silver jewelry are made by the Zuni, Navajo, Hopi and Pueblo peoples. The Zuni are best known for their fine channel inlay as well as their needle point or tiny stone clusters. The Hopi rely on a silver on silver technique called “overlay.” It is the Navajos who are thought to have been the first group to begin actually silver-smithing. In addition the Pueblo Indians can be fine silversmiths as well 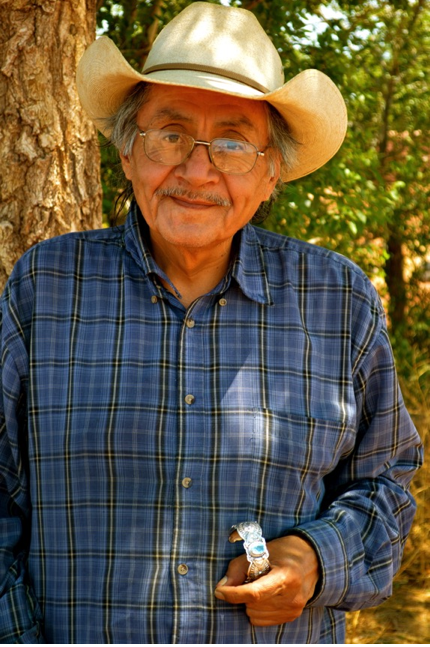 Emerson was born in the 1950's in Haystack New Mexico. Emerson and his brothers are well known artists. He is 62 years old and learned the art of silversmithing when he was 20 years old. He started working at a jewelry shop in Smith Lake on the Navajo Reservation where he watched the other silversmiths making jewelry. By observing these silversmiths, Emerson taught himself the art. Emerson obtained his tools by going to flea markets and pawn shops. He says he has never bought a new tool and prefers to use old tools. Emerson enjoys giving advice to other silversmiths and sharing what he had learned. His work is very unique, traditional, and clean.He is known for his stamp work and how perfect each piece is. His work is what one could see at a gallery in Santa Fe, New Mexico. Emerson makes jewelry as his only source of income. Other than silversmithing, Emerson enjoys hiking and a good game of bingo. 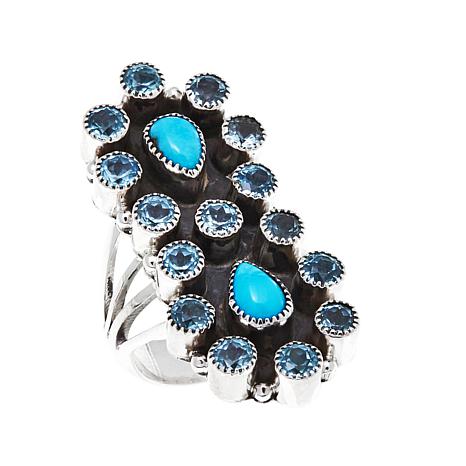 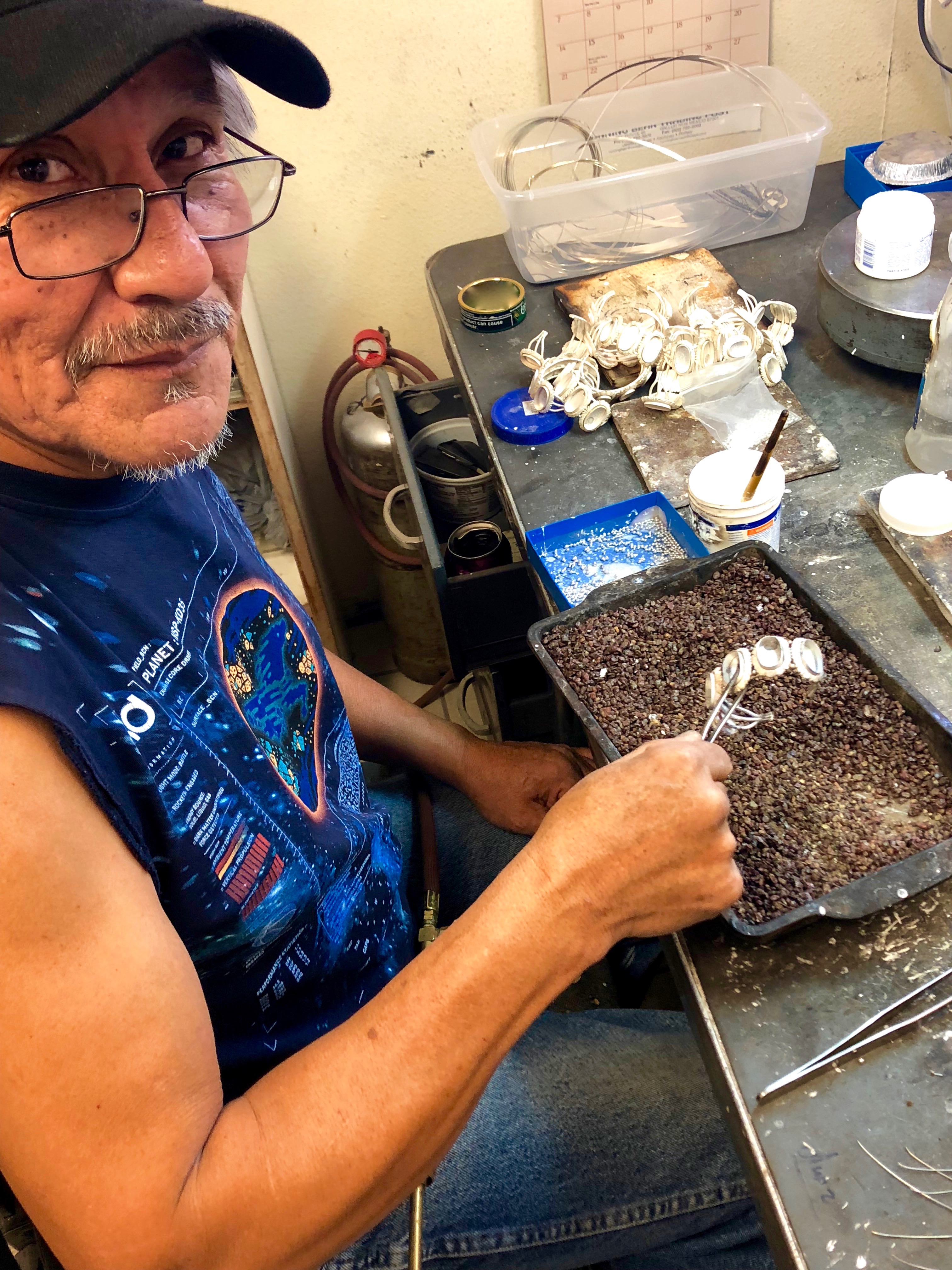 Mike and Loretta Smith have worked with our company for many years. They have been making jewelry for over 40 years. Loretta started out silversmithing with her dad when she was a teenager. Her dad was famous Navajo silversmith Wilbert Smith. Mike learned the art from his cousin. Both Mike and Loretta are very talented silver smiths. When Mike and Loretta are not working on jewelry they take care of their grandchildren. 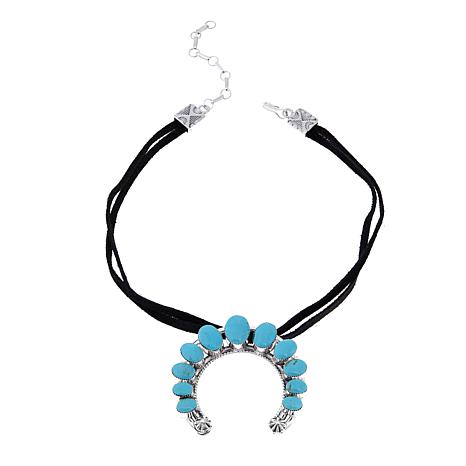 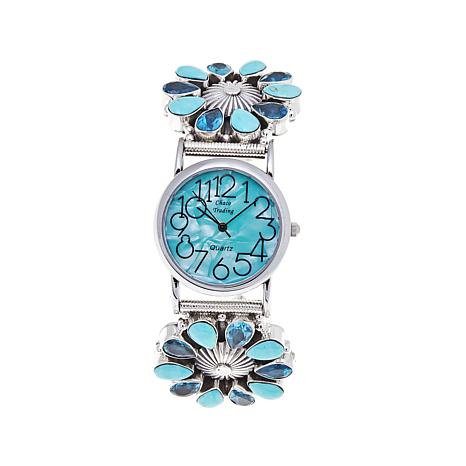 Sheena Jack is a Navajo woman from Prewitt NM. Sheena has been silversmithing for over 20 years and is an expert silversmith. Her mother and grandmother taught her. She is happy that she learned from women in her family because she values the time she spent with them. Her grandmother would tell her stories while making the jewelry. Sheena enjoys making jewelry and working with turquoise since it is a traditional stone to use.Sheena loves turquoise and believes turquoise is a sacred stone to the Navajo peoples. Sheena is proud of her work but she is also very humble. Sheena enjoys spending time with her family and loves cats. 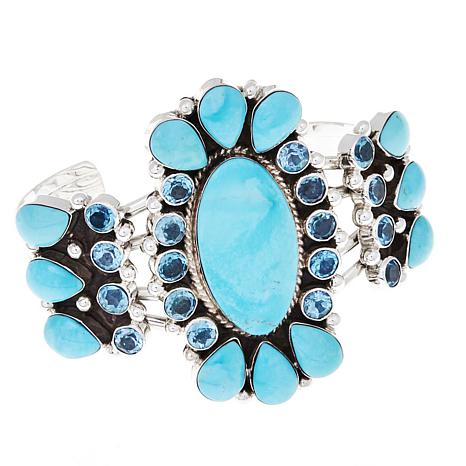 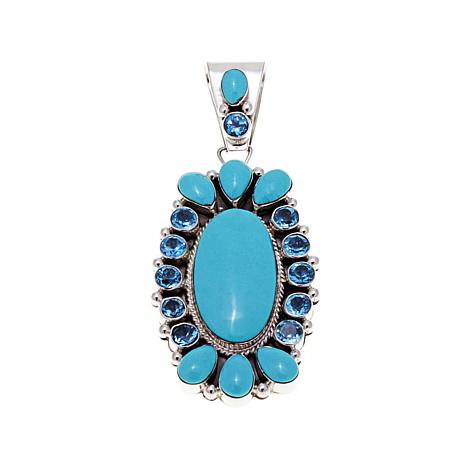 Greg Yazzie comes from a long line of silver smiths. Greg has been working around jewelry his whole life. Greg started out with our company polishing jewelry and moved up to a silversmith. Greg has a true understanding of jewelry and every aspect that goes into handmade pieces. Greg is known for his stamp work and how precise he is at making each piece. You can see from the pieces of above Greg is a true artist. Greg enjoys spending time with his wife and kids. 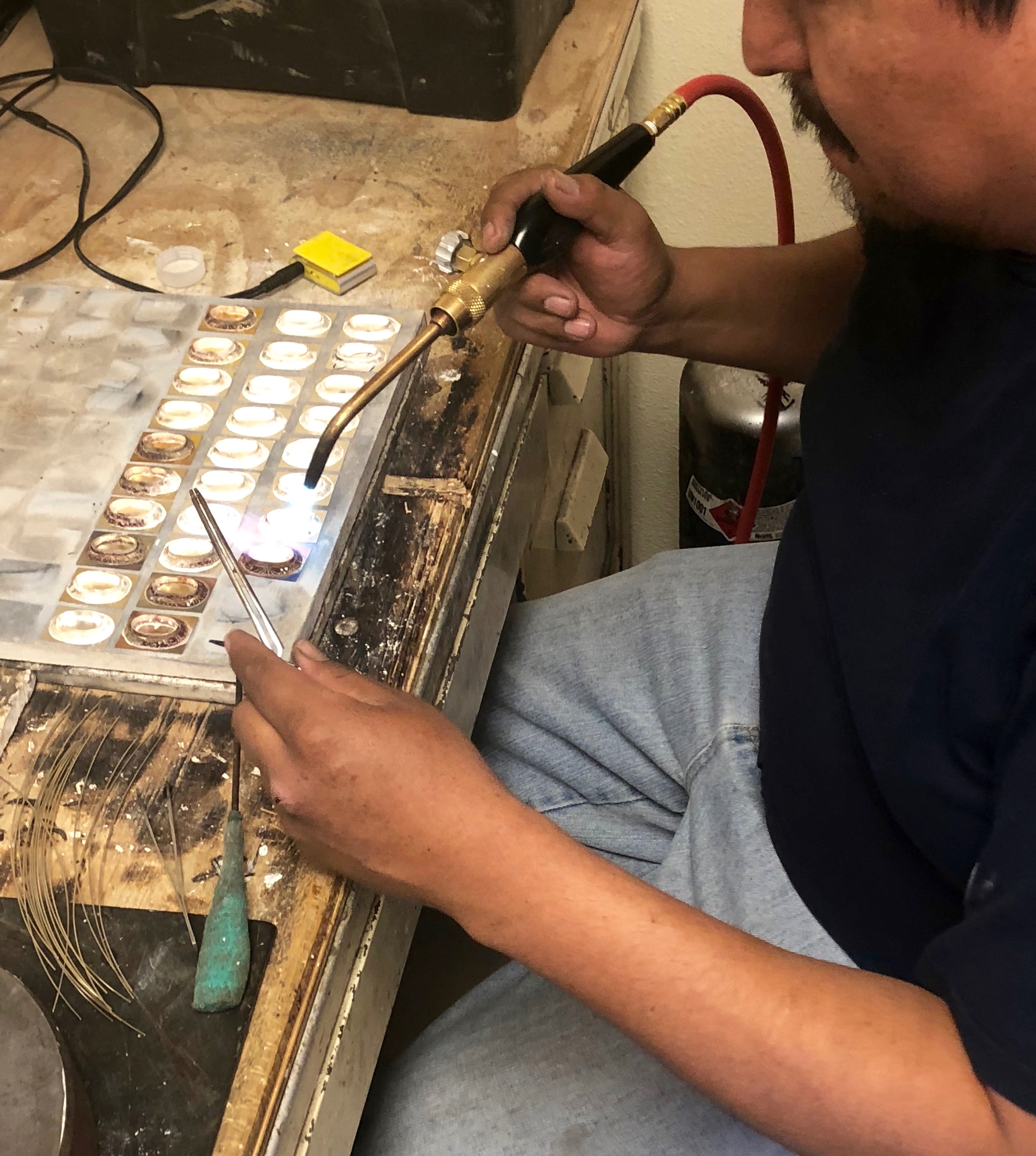 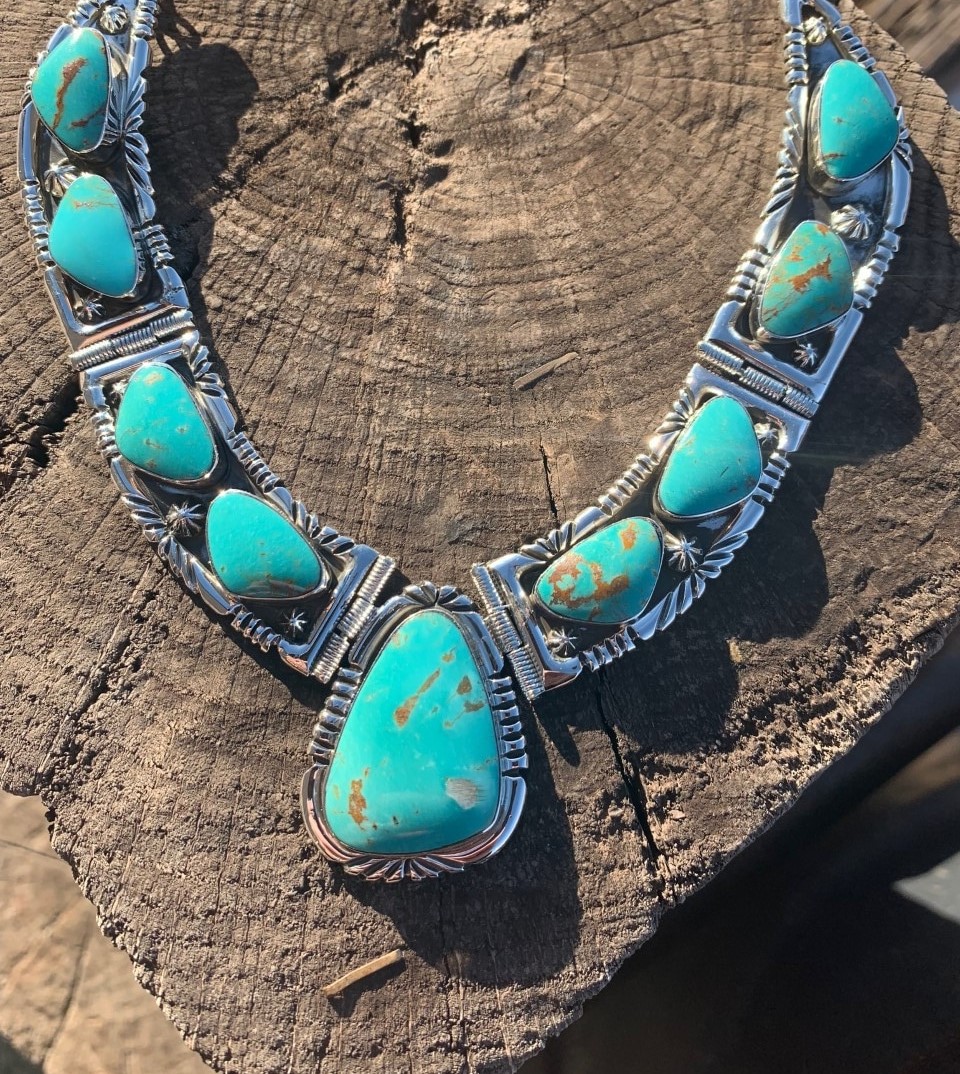 Jimson Belin is from Little Water New Mexico and has been working with us for over 10 years. Jimson learned the artistry from his uncle, Richard Belin, Richard was the very first silversmith that we started working with. Richard was a very talented silversmith and enjoyed teaching his kids and his nephews and nieces. Jimson is one of the most talented artists we work with. He has a true eye for design. Jimson makes all his own stamp, which in itself is an art form.

Rita Begay has been working in the jewelry studio with us for over 16 years! She enjoys doing bead work, such as the pieces you see above. Rita loves to joke around and laugh. Rita learned to make jewelry from Joe Hoskins and Charlie Hoskins back in the 1970's. She said in the 1980's when Urban Cowboy came to theaters, the Native American jewelry business went wild. Sales were up and everyone in our area was making some kind of jewelry. She hopes that Native American jewelry will make a big come back. 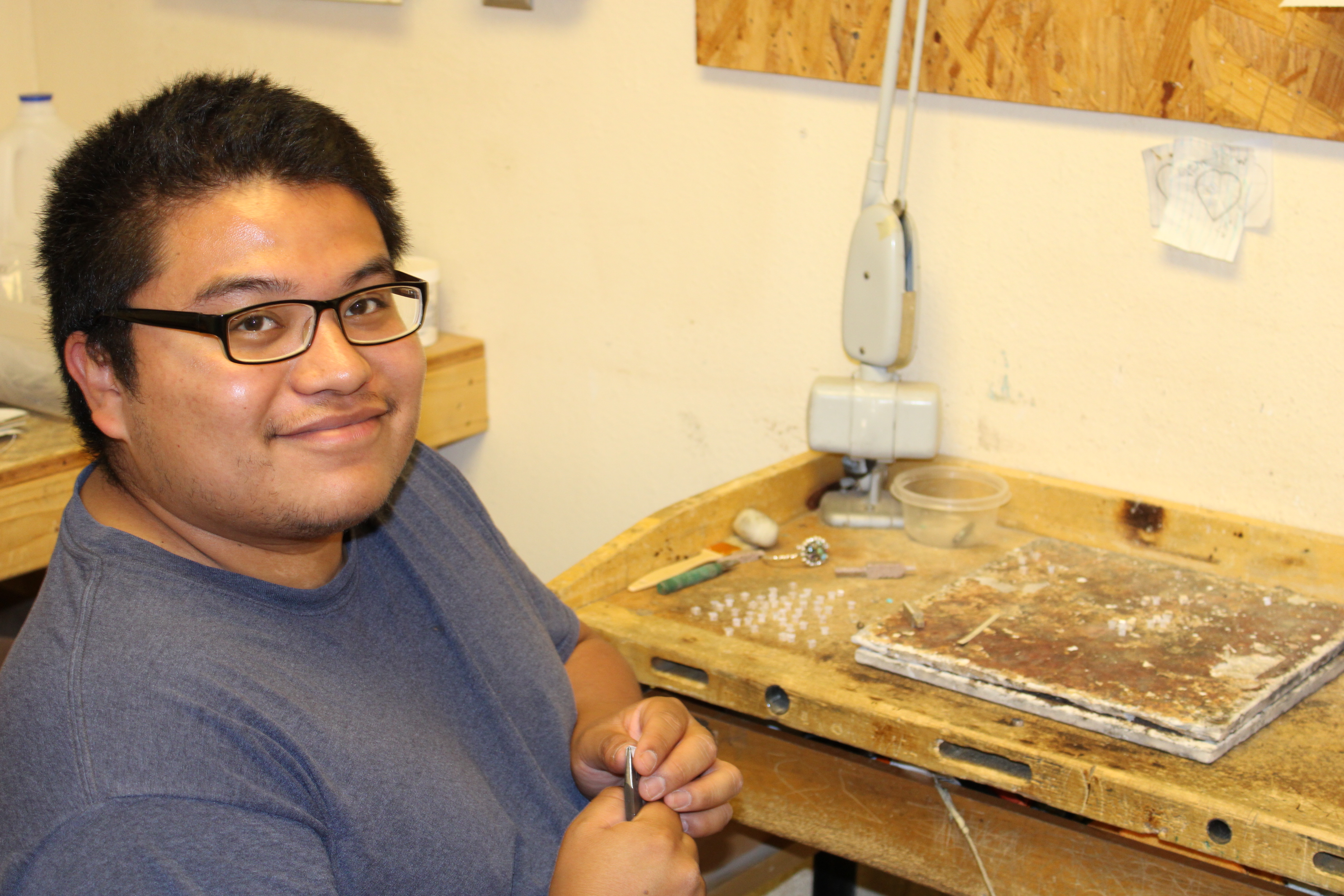 David Lopez is a new and upcoming artist. For just starting out, he makes beautiful pieces.David has taken some time off from the studio to focus on being a new dad. He is still working from home and does piece-work with us. David learned to silversmith from fellow artists Mike Smith, Jimson Belin, and Emerson Delgarito. We are excited to see how far David will go in the Native American jewelry world and we are happy to be apart of his journey. 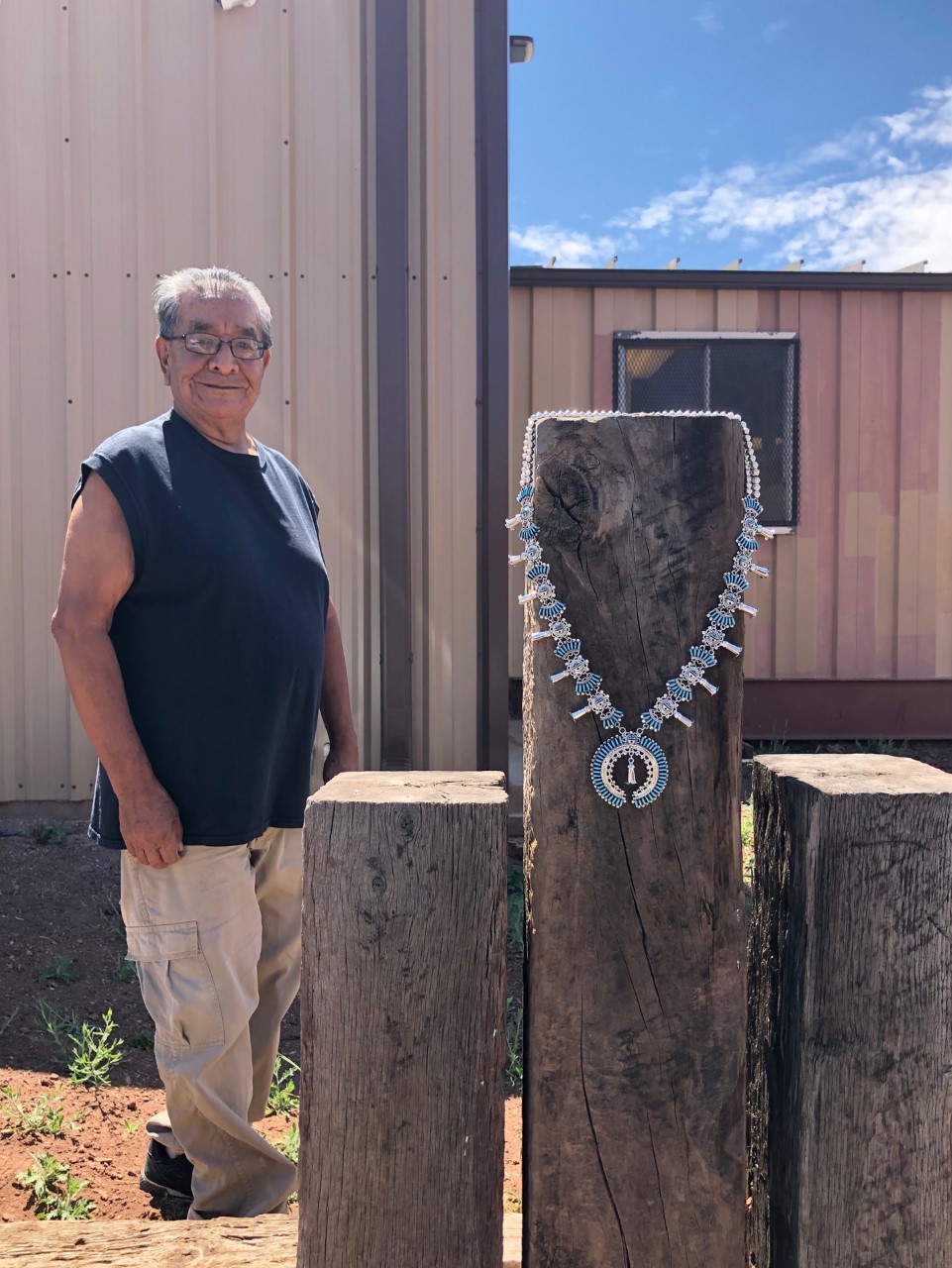 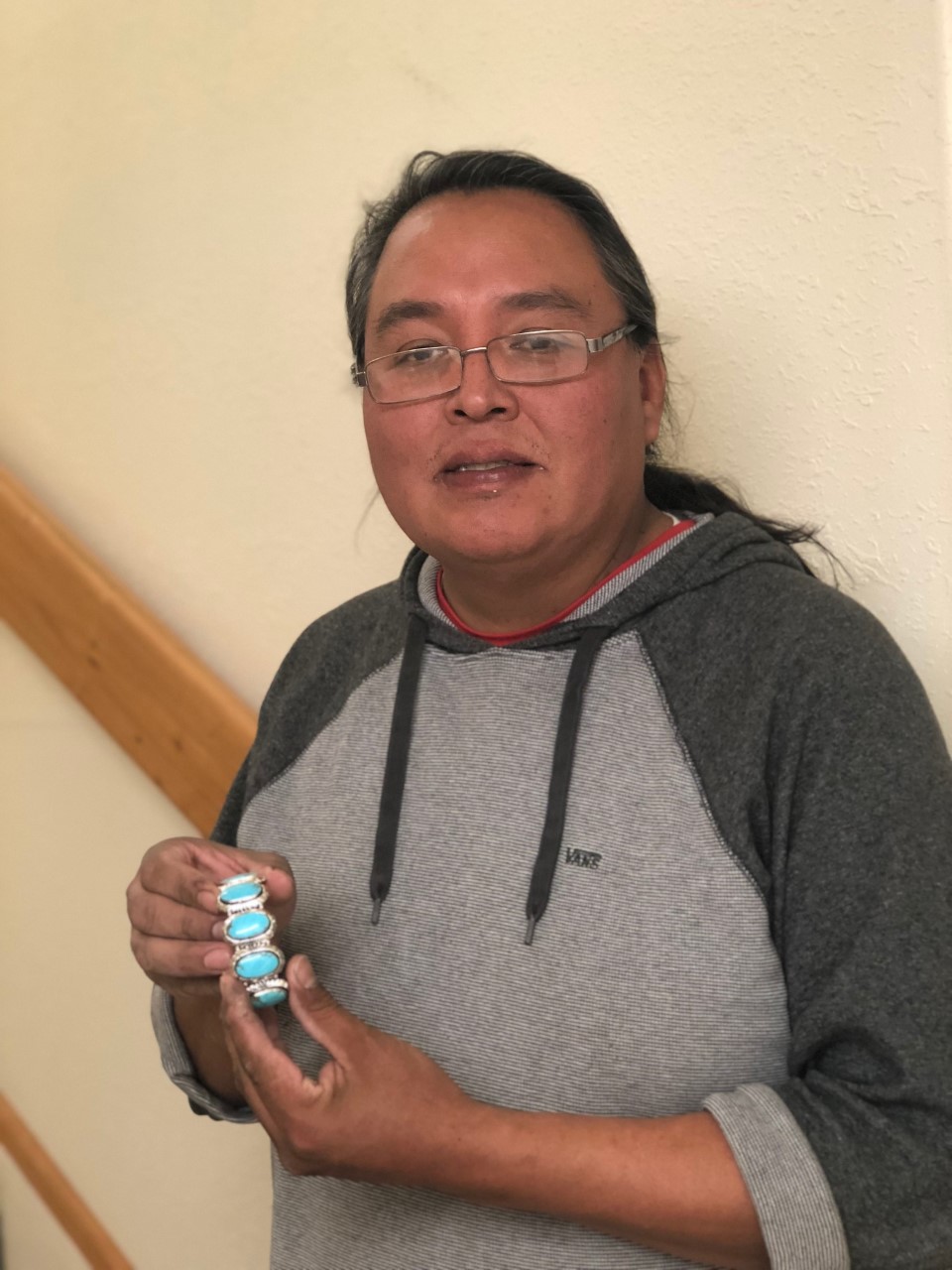 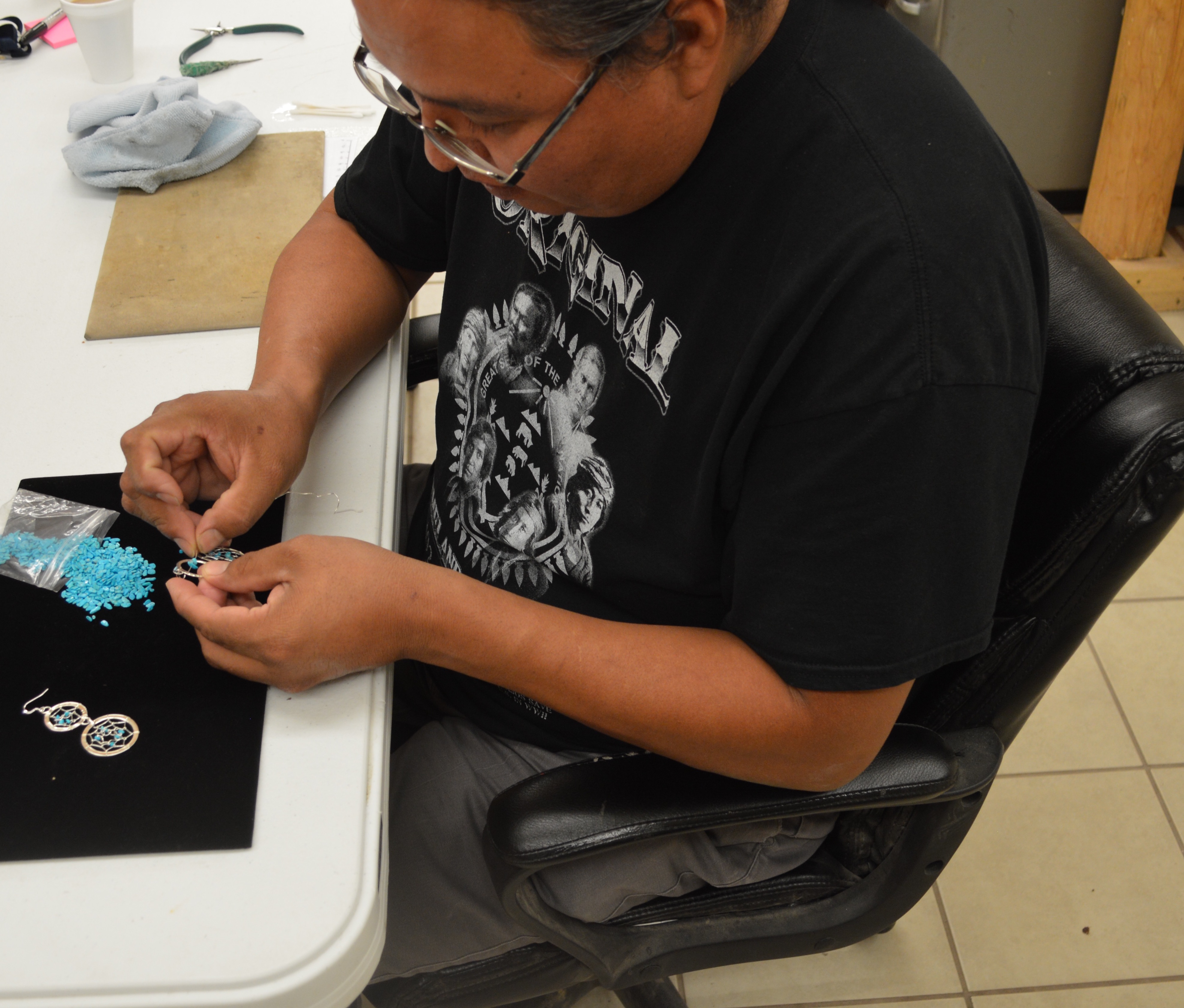 Bucky Belin is the son of our very first silversmith, Richard Belin. Bucky's mother and father taught him everything he knows about silversmithing. Bucky likes to make pieces that he thinks his dad would be proud of. Bucky works with us in the studio and he is very talented. He can silversmith, set stones, do bead work, polish jewelry, and inlay. He started silversmithing when he was in his late teens. He started helping his mom by making rings. She taught him how to shape the stones around the bezel and he would help her make all her bezel. Bucky's only source of income is making jewelry. He thinks it's very important to the Navajo culture to keep Native American style jewelry, made by Native Americans. Bucky is very passionate about his work and his designs. 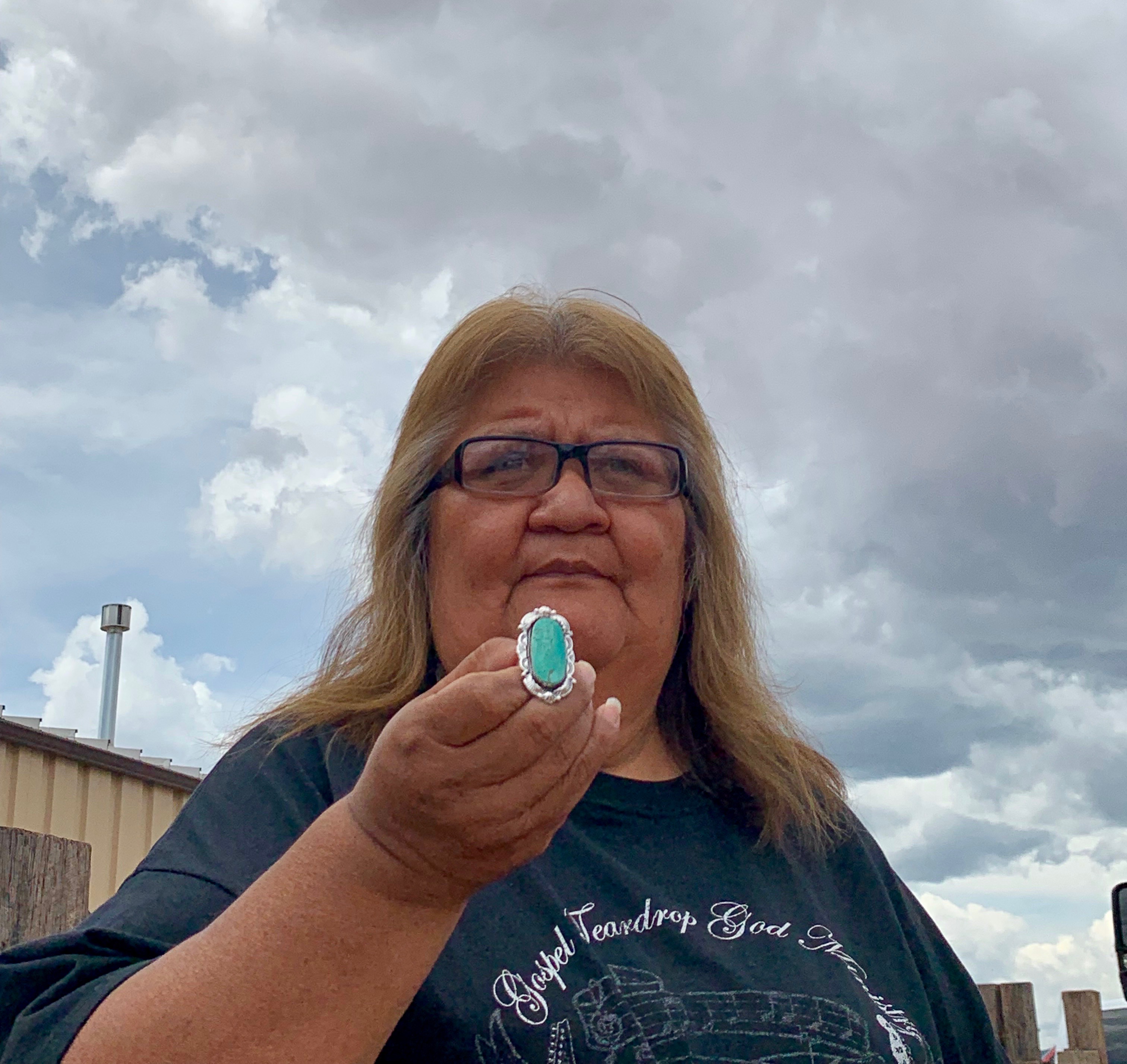 Loretta Delgarito is one of our most talented artists that we have the pleasure of working with. Loretta started making jewelry in the 1970's at the early age of 14! Loretta learned the art of silver smithing from her cousin. She said her cousin would pick her from school and they would make jewelry till 11 o'clock at night. She said she really enjoyed making jewelry and it became her passion. Loretta now works from home and gets piece-work from us. She says she loves to work at home because she is able to watch her grandkids grow. Loretta's son, Fernando is now learning the art form and is becoming a true artist by the day. Loretta loves working with turquoise because she said it reminds her of her grandmother. Loretta's style of jewelry is traditional with a contemporary twist. She says cluster style jewelry represents family, the middle represents the grandparents and the stones that are surrounding the middle are the children and the grandchildren. Loretta enjoys playing bingo with her son Fernando and going to see her grandchildren. Loretta has worked all over Albuquerque as a top silversmith. She worked for Felley Inc. out of Albuquerque until her mother was very ill and she decided to move back to our area to help take care of her. She started working with us again 2011. We very much enjoy Loretta and her fabulous designs.

Irvin Tsosie (NAVAJO) is 53 years old and lives on the Navajo reservation in Haystack, New Mexico. Irvin grew up around silversmiths and jewelry making. His parents and grandparents were silversmiths. Irvin has worked with jewelry for the past 15 years but has never perused silversmithing until this year. He has been buffing jewelry until now. Irvin was able to pick up the skills quickly because he was taught be Mike Smith and Emerson Delgarito. In the past 6 months Irvin has acquired the skills necessary to be a great silversmith 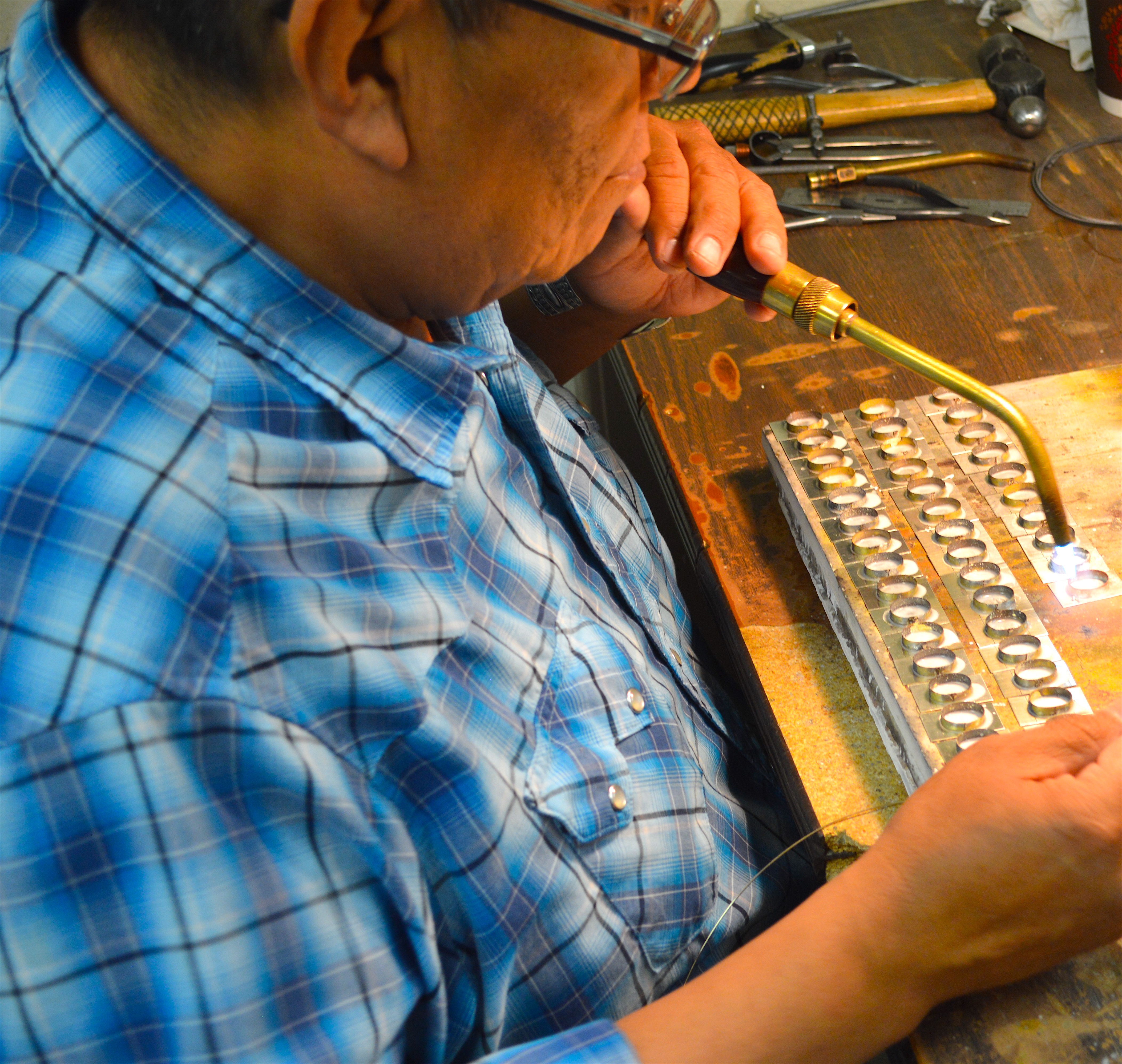 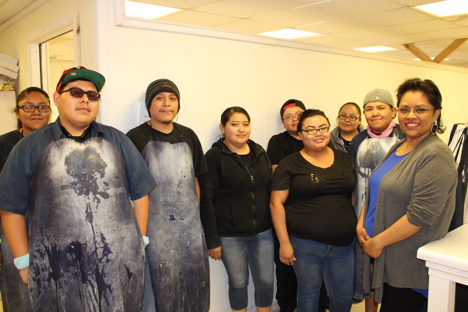 We hand cut almost all the stones that are in our pieces. The artists above make this all possible.